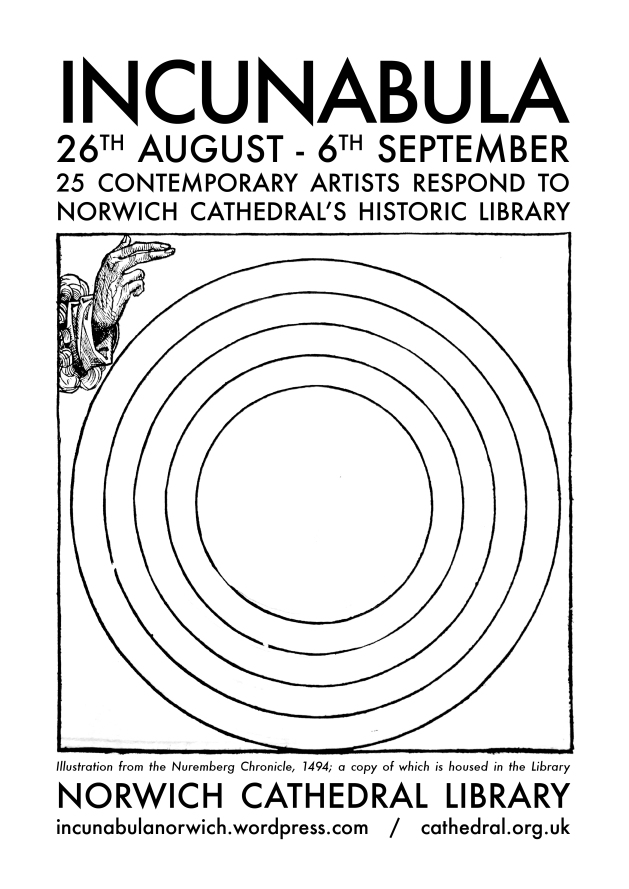 Incunabula is an exhibition in the Historic Library at Norwich Cathedral. In the long medieval room in the cloisters, which will continue to function as a place of study throughout the exhibition, twenty-five artists have responded to an open call with new site-specific work and existing objects. A huge range sculpture, video, sound, performance, painting and text, will occupy the bays, shelves, tables and chairs of the library with an exciting response to medievalism, contemplation, narrative, feminism and magic.

The library will also display books from its collection such as the Norwich Doomsday (a beautiful medieval illuminated manuscript) several ‘incunabula’ (early printed texts, including the Nuremberg Chronicle – a lavishly illustrated history of the world) and a 1549 copy of Tyndale’s New Testament. Norwich as a city has a long history of a love of books and words. It was the home of the first known woman to write a book in the English language (Julian of Norwich in 1395) when she wrote down a series of mystical visions. The first poem in blank verse was written here by Henry Howard, in the 16th Century. The first provincial library was also built here in 1608, and the first newspaper printed in 1701, and it was also the first city to implement the Public Library Act of 1850.